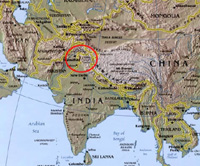 The first battle broke out when rebels opened fire on soldiers and police searching the remote mountains of the Udhampur district of India's Jammu-Kashmir state, said Col. D. K. Badola, an army spokesman.

The soldiers and police were cordoning off the area when the fighting began, and "after a two-hour long gunbattle, three militants and an army soldier were killed while another soldier was injured," Badola said.

Udhampur is about 160 kilometers (100 miles) north of Jammu, the state's winter capital.

Elsewhere in Kashmir, two militants were killed in a separate shootout Wednesday in the Mendher region of the Punch district, northwest of Jammu, Badola said.

Two more rebels were killed in a separate gunfight between rebels and army soldiers also in Punch district, he said.

Police were investigating which rebel groups the dead men belonged to, Badola said.

More than a dozen Islamic rebel groups have been fighting security forces for 16 years in India's portion of Kashmir for the Muslim-majority territory's independence from predominantly Hindu India, or its merger with mostly Muslim Pakistan.

More than 66,000 people, mostly civilians, have died in the conflict, reports the AP.