Ukraine threatened Wednesday to seek international arbitration over a gas dispute with Turkmenistan if the Central Asian country does not observe a deal on gas supplies. "If they intend to talk with us outside the framework of the agreement, we will respond, including going to Stockholm ," said Oleksiy Ivchenko, head of the state-run Naftogaz gas company. 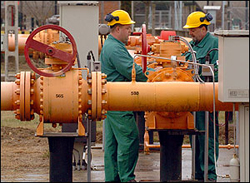 He was referring to the Arbitration Institute of the Stockholm Chamber of Commerce, which is responsible for settling such disputes if both parties agree to its mediation. Turkmenistan on Sunday accused Ukraine of owing it US$160 million (134 million) for past gas supplies. Ukraine 's Naftogaz countered, however, that Turkmenistan owed Ukraine US$11 million (9.2 million) because Kiev had paid for gas it had not received.

Turkmenistan is the second-biggest gas producer in the former Soviet Union after Russia , and is Ukraine 's biggest supplier. The country's gas supplies took on a greater importance last month after a bitter dispute between Ukraine and Russia over gas prices. Under a face-saving agreement, Ukraine agreed to pay nearly double the price for gas by blending Russian gas priced at US$230 (193) per thousand cubic meters with purchases of much cheaper Turkmen and other Central Asian gas.

The cheaper price was made possible because Ukraine was already locked in a deal to receive about 40 billion cubic meters of Turkmen natural gas this year, with the price set at US$50 (41) per thousand cubic meters in the first half of the year and US$60 (50) in the second half.

As part of the Kiev-Moscow deal, intermediary company RosUkrEnergo took over responsibility for transporting that Turkmen gas to Ukraine and mixing it together with Russian and other supplies for a rate of US$95 (80) per 1,000 cubic meters. Ivchenko also said that Turkmenistan had accused Ukraine of being in debt to justify a gas price increase.

"We will not compromise," he said. "We believe there are no grounds to raise the price." In January, Turkmenistan warned it may seek to nearly double the cost of its gas, sparking concern in Ukraine , reports the AP.