Arab League Secretary General Amr Moussa called on the European Union Wednesday not to politically isolate the incoming Hamas-led Palestinian government, but to try to convince it to seek peace with Israel. 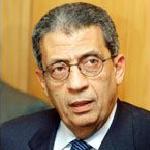 "If we attack Hamas saying they are terrorists, this will lead us to a barrier," Moussa told the European Parliament's foreign affairs committee.

Moussa told lawmakers that the EU had to put aside animosities over the militant group's record and respect the fact that its political wing won elections in a democratic vote.

He said that if the new Palestinian government choses peace, then the EU, the Arab league and others "should make every effort to help this government," reports the AP.