Pope Benedict XVI named 15 new cardinals on Wednesday, including prelates from Hong Kong , Boston and Krakow , Poland , adding his first installment to the elite group of churchmen who will elect his successor. Benedict read aloud the names during his weekly general audience and said they would be elevated during a ceremony at the Vatican on March 24. 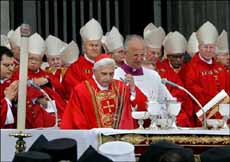 Benedict also named the archbishops of Caracas , Venezuela ; Seoul , Korea ; Bordeaux , France ; Toledo , Spain and Manila , Philippines . He also said his successor at the Congregation for the Doctrine of the Faith, Archbishop William Levada, would be made a cardinal, the second American among the new names.

Twelve of the 15 men are under the age of 80, and thus eligible to vote in a conclave to select Benedict's successor. Among the new cardinals is Hong Kong Bishop Joseph Zen. Benedict has been reaching out to China and the elevation of Zen, who has been outspoken in the need for religious rights of Catholics in China , was an indication that religious freedom is important to the pontiff.

Benedict also tapped Pope John Paul II's longtime private secretary, Krakow Archbishop Stanislaw Dziwisz. In addition, he named the archbishop of Boston , Sean O'Malley, who was brought in by John Paul to clean up the archdiocese following the sex abuse scandal that forced the resignation of Cardinal Bernard Law.

Prior to Wednesday's announcement, there were 178 cardinals, 110 of whom are under age 80 and thus eligible to participate in a conclave to elect a new pope. Two of those 110 will turn 80 in the next month, however. In 1973, Pope Paul VI established that the maximum number of cardinal electors be set at 120. John Paul, however, frequently went over that number. During his 26-year pontificate, John Paul presided over nine consistories, creating a total of 231 cardinals, reports the AP.