A cholera outbreak has killed at least 45 people and infected some 1,864 others in the past two weeks in the southern Sudan capital, an international medical charity said Wednesday. Cholera is transmitted by consumption of contaminated water and food and is linked to poor hygiene, overcrowding and inadequate sanitation. It leads to severe diarrhea and dehydration. 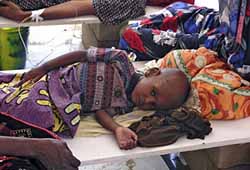 Medecins Sans Frontieres said "a large outbreak can be expected" in Juba , a town with more than 250,000 people that "relies heavily on polluted water from the River Nile." Cholera is also expected to spread because residents are believed to have little knowledge about how the disease is transmitted and how they can avoid infection, the group said in a statement.

Medecins Sans Frontieres, which currently has 11 international staff working in Juba , plans to send seven more before the weekend to help contain the infection. They also plan to send more than 70 metric tons (77 tons) of medical and other supplies, reports the AP.