China to try to rule in farmland seizures

China will try to rein in seizures of farmland for development, a key source of rural unrest, as it carries out a new plan to improve life in the poor countryside by spending more on schools and farm subsidies, an official said Wednesday. Communist leaders are trying to defuse growing anger over rural poverty and increasingly violent protests over the seizure of land for factories and other projects. 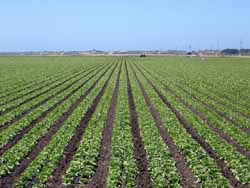 China to try to rule in farmland seizures

"In the process of socialist development, we should requisition as little land as possible," said Chen Xiwen, an official of the Communist Party's "leading group" for financial affairs. He said land seizures were to blame for "instability in the countryside."

A plan unveiled Tuesday calls for more government spending on rural education, health care and other services as part of a campaign to spread prosperity to the 800 million people in China's countryside and others who have missed out on its economic boom.

"The widening gap between urban and rural areas should be dealt with in real earnest," Chen said at a news conference. "For those farmers who already have lost land in this process, we should give them job training and social services."

Chen promised that the government will use more "democratic consultation" and avoid coercion in carrying out land conversions, though he didn't say how that would work. "We should discuss with the farmers what to do first," he said.

The rural development plan is likely to dominate the agenda for China 's parliament, which opens its two-week annual session on March 5. Capitalist-style reforms begun in 1979 have let millions of Chinese lift themselves out of poverty. But many more have seen little change and are struggling with stagnant incomes, corruption and the seizure of farmland for redevelopment.

China 's economy is expected to extend its streak of sizzling growth this year, expanding by more than 9 percent. But a report in September by an official think tank warned that half of all income goes to the top one-fifth of the population, while the bottom one-fifth gets just 4.7 percent.

The plan issued Tuesday promises at least 15 billion yuan (US$1.9 billion; Ђ 1.5 billion) in farm subsidies, subsidized medical care and other aid. It says school fees will be eliminated this year in China 's poor west and in other rural areas in 2007, reports the AP.