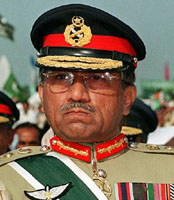 "Pakistan will continue to contribute to developing friendly cooperation with China's defense department, military and other departments," Xinhua quoted Musharraf as saying.

Beijing is one of Islamabad's closest allies and its leading weapons supplier.

"Pakistan's economy grew by 8.4 percent last year," he told officials and business community members Tuesday at a forum in Beijing, the agency said. "This year ... we are sure we will grow by over 7 percent."

Pakistan has a strategic location, cheap labor and serves as a regional energy corridor for China's access to Southeast Asia, India and the Gulf, Xinhua quoted Musharraf as saying, reports the AP.