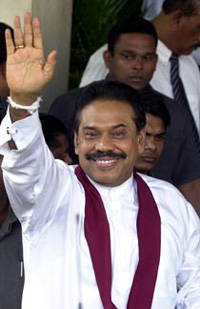 The government and Tamil Tigers have to start rebuilding confidence in each other, Norwegian mediator Erik Solheim told the two sides at the start of the their two-day meeting.

"Strengthening of the implementation of the cease-fire itself is an extremely important agenda," said Solheim, adding he hoped that more meetings would be set at the end of he talks to resume discussions on a peace settlement.

The talks were convened on the fourth anniversary of the signing of the cease-fire that began to unravel in December after the election of a hardline Sri Lankan administration and an escalation of violence by the rebels in the north.

The peace talks broke down in 2003 after six rounds of negotiations when the rebels were excluded from a conference in Washington because the United States had branded them a terrorist organization.

On the eve of the talks, a Sri Lankan spokesman indicated the government delegation would seek to fix what he called "flaws" in the cease-fire agreement, and move the talks beyond the truce to issues of "lasting peace."

"We are seeking a formula for peace in Sri Lanka," said Rohitha Bogollagama, a senior minister speaking to reporters at Nyon, outside Geneva, reports the AP.