Ousted Haitian leader Jean-Bertrand Aristide is ready to return after what he calls an unconstitutional exile, but said when was up to his country's president-elect and other leaders. "The date of my return will emerge from consultations" among Haitian President-elect Rene Preval, the United Nations, the Caribbean Community and the South African government, Aristide said Wednesday in an interview with international news agencies. 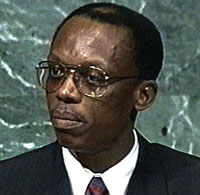 Aristide has been a "guest" of the South African government since he was ousted in February 2004. Wednesday, he said his exile violates Haiti 's consititution Aristide and Preval hold similar views about ending the subjugation of Haiti 's poor black majority by a lighter skinned elite. In the interview, Aristide likened Haiti 's situation to South Africa 's under the now-toppled apartheid system. Aristide nurtured Preval's career, but the two men have subsequently fallen out.

Aristide on Wednesday sent congratulations to the Haitian people and to Preval on the Feb. 7 election. "What happened indicates the road toward freedom and democracy and not toward coups d'etat," he said.

He insisted he would play no role in politics on his return, saying he would return to teaching and concentrate on much-needed education in Haiti , where more than 80 percent of the population is illiterate. He called for the release of political prisoners such as his former prime minister Yvon Neptune. Hundreds of leaders and supporters of his Lavalas Family party have been jailed without charge by a U.S. -backed government, reports the AP.