Sri Lankan government leaders and Tamil rebels began their first direct talks in nearly three years on Wednesday at a secluded chateau outside Geneva , hoping to restore a shattered cease-fire agreement and revive peace talks. The government and Tamil Tigers have to start rebuilding confidence in each other, Norwegian mediator Erik Solheim told the two sides at the start of the their two-day meeting. 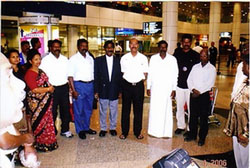 "Strengthening of the implementation of the cease-fire itself is an extremely important agenda," said Solheim, adding he hoped that more meetings would be set at the end of he talks to resume discussions on a peace settlement. The talks were convened on the fourth anniversary of the signing of the cease-fire that began to unravel in December after the election of a hardline Sri Lankan administration and an escalation of violence by the rebels in the north.

The peace talks broke down in 2003 after six rounds of negotiations when the rebels were excluded from a conference in Washington because the United States had branded them a terrorist organization. n the eve of the talks, a Sri Lankan spokesman indicated the government delegation would seek to fix what he called "flaws" in the cease-fire agreement, and move the talks beyond the truce to issues of "lasting peace."

"We are seeking a formula for peace in Sri Lanka ," said Rohitha Bogollagama, a senior minister speaking to reporters at Nyon, outside Geneva . The Norwegian government persuaded the government and rebels of the Liberation Tigers for Tamil Eelam to meet after an upsurge in violence in December and January killed about 150 people, including more than 80 Sri Lankan military personnel.

In a lead up to the resumption of the negotiations, the sides lunched together Tuesday at the Chateau de Bossey, the talks' venue under snow-dusted mountains outside the village of Celigny . In the first move toward amending the truce, the Norwegian head of the 60-member truce monitoring team will step aside in favor of a Swede, the Norwegian government announced.

The Sri Lankan government had objected to the Norwegians acting as both peace mediators and commander of the truce observers, who are drawn from the Nordic countries.

Ulf Henricsson, 64, a retired Swedish general, who served in U.N. missions in the Balkans, will succeed Norwegian Brig. Gen. Hagrup Haukland on April 1. "This will definitely be a difficult task," Henricsson told The Associated Press in Stockholm . "There are no quick fixes."

In Sri Lanka , religious leaders in Jaffna in the troubled north of the Indian Ocean island, prayed for success at Geneva . In a rare show of ecumenism, Hindu, Christian and Muslim clergy led the prayers in a public hall, which were to continue until the talks conclude.

Tamil rebels have been fighting since 1983 for independence or a Tamil homeland in the north and east of the country, where the minority Tamil population is concentrated. The war killed 65,000 people before the cease-fire was signed in 2002, reports the AP.