The American hockey team goes to the Olympic quarterfinal party Wednesday and probably has to feel somewhat fortunate to be one of the invitees. 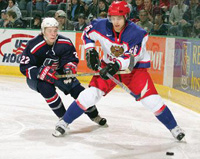 Russians 5-4 win against USA
Team USA lost 5-4 to Russia on Tuesday, meaning the Americans, who will play the unbeaten Finns, are the only team in the final eight that hasn't beaten any other team on the guest list. The USA's only win came against Kazakhstan.

The other quarterfinal matches are Slovakia vs. the Czech Republic, Switzerland vs. Sweden and Canada vs. Russia.

Montreal Canadiens winger Alexei Kovalev scored the game-winner at 11:52 of the third period on a 48-foot shot past U.S. goaltender Robert Esche, who was making his first start of the tournament to give New York Islanders goalie Rick DiPietro a chance to rest before the quarterfinals.

The Americans had tied the score 4-4 at 10:38 of the period when Carolina Hurricanes forward Erik Cole scored on a wraparound past Russian League veteran Maxim Sokolov, who replaced San Jose Sharks goalie Evgeni Nabokoy after one period.