Representatives of the rival Hamas and Fatah movements met Wednesday to discuss the possibility of forming a coalition Palestinian government. Hamas, which holds a majority in the new Palestinian parliament, has been seeking partners for a broad-based coalition, in part to soften international opposition to the Islamic militant group. 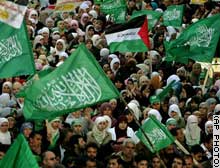 Wednesday's meeting was the first between Hamas and Fatah, the long-ruling party that was trounced in last month's election. Officials in Fatah say it is unlikely they will join Hamas in the government. Abbas appointed Hamas lawmaker Ismail Haniyeh on Tuesday night to be prime minister, giving him five weeks to cobble together a government.

The talks took place at the home of Hamas lawmaker Mahmoud Zahar. The Fatah delegation included lawmaker Azzam al-Ahmed and Ahmed Hilles, the Fatah leader in the Gaza Strip, reports the AP.