Iran is not ready to accept Russia 's proposal aimed at resolving the international crisis over Tehran 's suspected nuclear weapons program, Russian newspapers reported Wednesday, citing Iranian officials. The two countries' negotiators on Tuesday completed two days of inconclusive talks in Moscow on a Russian offer to enrich uranium for Tehran to avert suspicions that the Iranians could divert the nuclear fuel for atomic weapons. 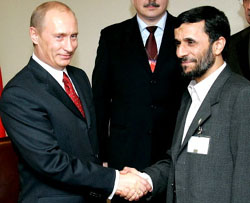 The Vedomosti daily quoted an official close to the Iranian delegation as saying that Iran insisted on the right to conduct its own enrichment activities. "There are no reasons at this stage to resume dialogue," said the official, who the newspaper did not identify.

An Iranian diplomat cited by the Vremya Novostei daily said that the Middle East country wanted Russia to produce large-scale enriched uranium for it but needed a domestic uranium enrichment program to create "the basis for independence in the nuclear sphere." The diplomat also was not identified.

The proposal, backed by the United States and the European Union, is seen as the final opportunity to ease international concerns over Iran 's suspected nuclear weapons drive. Tehran has insisted on its right to maintain domestic enrichment despite international calls for it to stop.

The U.N nuclear watchdog, the International Atomic Energy Agency, holds a March 6 meeting that could start a process leading to punishment by the U.N. Security Council, which has the authority to impose sanctions on Iran , reports the AP.