Police raided the house of a senior opposition leader who has been instrumental in organizing anti-government protests and arrested him Wednesday, just two days after he was freed by the Supreme Court, officials said. 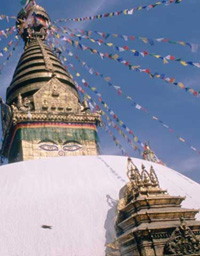 Krishna Sitaula, spokesman for the Nepali Congress party, was picked up from his home in downtown Katmandu and detained for three months under the Public Security Act, a government notice said.

Sitaula was arrested as a preventative measure and because he was considered a threat to public safety, said an official at the district administration office that ordered the arrest. He spoke on condition of anonymity because he was not authorized to speak to reporters.

Sitaula has been one of the leading figures in the protests by the alliance of seven major political parties against King Gyanendra's direct rule over this Himalayan nation.

Family members at his home said police burst into his home in the morning and handed over papers saying he was under arrest. They only found out later he would be detained for three months, reports the AP.