As Muslim leaders insist that they would make up any funding that the Palestinians lose with Hamas assuming power, Secretary of State Condoleezza Rice arrived in the Middle East Tuesday to urge Arab governments not to give the militant group a blank check. 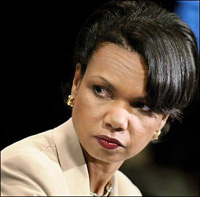 Rice is focusing her visit on Egypt and Saudi Arabia, the two Arab power centers and longtime U.S. allies. She plans to lobby their leaders to pressure Hamas to lay down its arms and recognize Israel, or risk isolation from the Arab world. But Rice's campaign did not get off to a promising start in Cairo, where she met with Egypt's intelligence chief and foreign minister.

But Gheit argued that the United States and Europe were being hasty in threatening to cut off aid to the Palestinian Authority. "We should give Hamas time," he said, standing next to Rice. "I am sure that Hamas will develop, will evolve. We should not prejudge the issue."

Last month Hamas won 74 of the 132 seats in the Palestinian legislature, displacing the Fatah movement after four decades in power. Palestinian President Mahmoud Abbas asked Hamas to form a new government, which includes a prime minister and cabinet.

While it appointed a relative moderate, Ismael Haniyeh, as prime minister on Sunday, Hamas still has a long way to go before it can win international acceptance. The group is designated a terrorist organization by the United States and the European Union. Israel and the West have demanded that it renounce violence, recognize the Jewish state and promise to abide by existing peace agreements. Hamas leaders have refused to do so, reports Newsday.