The foreign ministers of Denmark and Norway on Monday signed an agreement to draw their Arctic maritime border halfway between Greenland and the Svalbard islands. 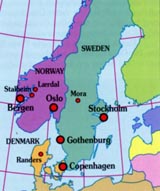 The deal, which establishes the two countries' rights over fishing as well as oil and gas reserves in the area, had been held up pending exact mapping of the coastlines.

Greenland is a semiautonomous Danish territory, while Svalbard is an Arctic archipelago north of the Norwegian mainland.

Norway hopes the deal can set a precedent for a similar agreement being sought with Russia in the Barents Sea.

"We hope that this will send a good signal to others about how to solve this type of issue," Norwegian Foreign Minister Jonas Gahr Stoere was quoted as saying by Norwegian news agency NTB. Oslo's talks with Moscow on the issue have dragged on for years.

He signed the agreement with his Danish counterpart, Per Stig Moeller, during a visit to Copenhagen.

The deal must be ratified by lawmakers in both countries, reports AP.