India wants to strengthen its ties with Iran , despite Indian support to report Iran to the U.N. Security Council over its nuclear program, Prime Minister Manmohan Singh told Parliament on Friday. Singh also took a jab at Pakistan in a speech to Indian lawmakers, saying the source of secret proliferation lay in "our own neighborhood", an apparent reference to Pakistan 's national hero and discredited nuclear scientist A.Q. Khan, who allegedly leaked nuclear secrets. 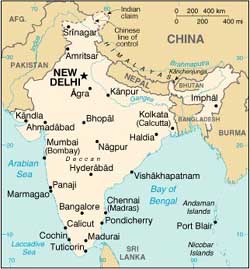 Singh has faced widespread criticism from his leftist allies, whose support is crucial to the survival of his coalition government, over India's support for a resolution adopted by the International Atomic Energy Agency to report Iran to the Security Council over fears it wants to produce nuclear weapons.

"Iran's vote on the IAEA resolution does not, in any way, detract from the traditionally close and friendly relations we are privileged to enjoy with Iran," Singh said. "We intend to further strengthen and expand our multifaceted ties with Iran for mutual benefit."

He noted that "there remain many unresolved questions on key issues" in Iran's nuclear program, but that only diplomacy could bring a resolution to the international crisis. India is "deeply concerned by the escalating rhetoric and growing tension and the possibility of a confrontation over this issue," he said. "We therefore call upon all concerned to exercise restraint, demonstrate flexibility and continue with dialogue to reach an amicable settlement."

Singh's comments are seen as an attempt to soothe communist parties that control 61 seats in India's 545-seat Parliament. The communists say Singh is bending to pressure from the United States to betray Iran, a longtime Indian ally. India is walking a thin diplomatic line between the two countries. It has signed a landmark nuclear pact with the United States that would let New Delhi import American nuclear fuel for its civilian program and is also negotiating a trans-Asian pipeline project with Iran.

Both agreements are part of India's ambitious efforts to increase its availability of energy. With international oil prices rising, India is looking to other sources, including nuclear power, to fuel its booming economy, one of the fastest growing in the world. Singh also made an indirect reference to alleged nuclear proliferation from Pakistan .

"Honorable members are aware that the source of such clandestine proliferation of sensitive technologies lies in our own neighborhood, details of which have emerged from successive IAEA reports," he said. "This august house will agree that India cannot afford to turn a blind eye to security implications of such proliferation activities." Khan, known as the father of Pakistan 's atomic bomb, ran a network that allegedly smuggled nuclear technology overseas. He and the country's nuclear program have come under widespread criticism, particularly for proliferation concerns, reports the AP.