About 500 Muslims rallied in Bangladesh's capital Friday to protest the publication of Prophet Muhammad's caricature, police and organizers said. 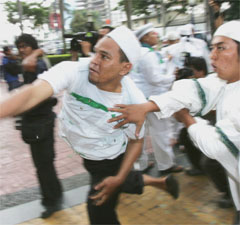 Chanting, "Down with Islam's enemies," activists from the hard-line Islamic Constitution Movement marched through streets outside Dhaka's main mosque after Friday's prayers, said a Dhaka Metropolitan police official on condition of anonymity in line with official policy.

They carried banners and placards, reading "Punish the cartoonist" and "Stop the anti-Muslim campaign."

The rally was peaceful, the official added.

"We can't tolerate any humiliation to our beloved Prophet. If necessary, we will sacrifice our lives to protect our faith," A. T. M. Hemayetuddin, a leader of the movement, told his supporters, reports the AP.