Indonesia 's president embraced his East Timorese counterpart Friday, and said a report detailing atrocities committed by Indonesia during its occupation of the tiny nation would not affect ties. East Timorese President Xanana Gusmao did not address the report, which was submitted to the United Nations last month, but said he was looking forward to "living in peace" with his giant neighbor. 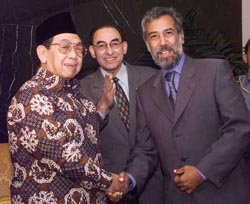 The report says at least 102,000 East Timorese were killed, abducted, starved or died of illnesses under Indonesia 's occupation from 1975-1999. It also describes sexual violence, and the use of napalm and torture by Indonesian forces, among other abuses.

Indonesian President Susilo Bambang Yudhoyono said the report, which was prepared by local and international experts working for East Timor 's truth and reconciliation committee, was "an internal matter between the United Nations and East Timor ."

"In the future, it will become a piece of history in the relationship between the two countries," he said after talks with Gusmao on the resort island of Bali . The report's findings were in line with other published accounts of the decades-long occupation, but it put a fresh spotlight on Indonesia 's history there, triggering anger in Jakarta .