Foreign Minister Sergey Lavrov said Friday that next month's Moscow talks with Hamas leaders were aimed at bringing the militant Palestinian group into the Mideast peace process. "We are counting on all this to foster progress toward a situation in which Hamas will be a legitimate, integral and useful part of the peace process in the Middle East ," Lavrov told reporters. 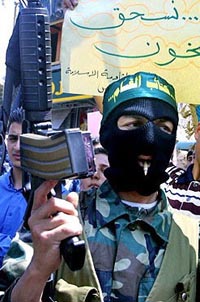 He stressed that Russian officials in the talks would negotiate in accordance with the agreed position of the so-called quartet of Mideast peace mediators: Russia , the United States , the United Nations and the European Union. "We will be guided by the agreed position of the quartet," Lavrov said. "We will continue the work that the leadership of many Middle East regional countries have conducted with the Hamas leadership."

He said Palestinian and Russian officials were still deliberating on the composition of the delegation to the talks. Earlier Friday, Russia 's special Mideast envoy said Russian officials would make no demands of Hamas during the meeting, which he said would take place during the first week of March, the Interfax news agency reported.

"During our meeting, we will not put forth any demands. They themselves should take a decision on steps that meet the interests of the Palestinian people and help resolve the issues on the agenda of Palestinian-Israeli relations," Alexander Kalugin was quoted as saying. "We just want them to transform themselves in a positive manner. We are not going to sit at the table banging our fists; they know what the international community wants them to do," he said.

President Vladimir Putin's invitation to the militant group, made at a news conference in Spain earlier this month, was the latest bid by Moscow to invigorate its role in Mideast peacemaking after years of taking a back seat to the United States . The invitation stunned Israel and other nations.

Hamas's parliamentary victory prompted threats from the United States and European Union to cut off massive aid to the Palestinians unless the group responsible for scores of suicide attacks and designated a terrorist organization by many Western nations recognizes Israel and renounces violence.

But Russia 's ambassador to the United Nations, Andrei Denisov, told the Russian daily Izvestia earlier this week that cutting off international aid to the Palestinians would be "counterproductive." "In history there are many examples of radicals coming to power and adopting a more realistic and constructive stance," Denisov was quoted as saying. "We all hope that Hamas will show sense."

Acting Israeli Prime Minister Ehud Olmert has ruled out talks with Hamas until it renounces violence, recognizes Israel 's right to exist and accepts past agreements between Israel and the Palestinians. A Western diplomat said Thursday that the Russians had promised to deliver "a very straight and direct message in keeping with the quartet framework."

Russia 's failure to designate Hamas as a terrorist organization has raised questions of double standards, considering its insistence that no negotiations be held with Chechen militants. Israel's Foreign Ministry has distributed frame-grabs from videos that allegedly prove not only a shared commitment to violence between Hamas and the Chechens, but also Hamas support for the rebels who have been fighting Russian forces for more than a decade, reports the AP.