Secretary of State Condoleezza Rice says North Korea is "getting very little traction" in its claim that U.S. financial sanctions are the reason the North won't return to international nuclear talks. "It's simply the responsibility of the United States government to pursue these measures if someone is trying to counterfeit our currency," Rice told the House of Representatives International Relations Committee on Thursday. 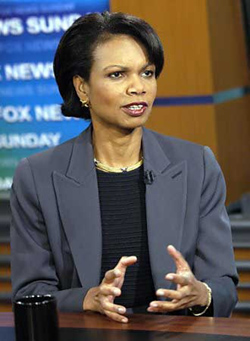 Washington has repeatedly said that financial restrictions meant to halt alleged weapons proliferation and counterfeit currency distribution by North Korea are unconnected to efforts by South Korea , China , Japan , Russia and the United States to persuade the North to abandon its nuclear programs. "The North Koreans are getting very little traction with other states with the argument that that's the reason they won't go back to six-party talks," Rice said.

America , she said, is prepared to restart the negotiations immediately. "It is our hope that the North Koreans will come back and come back seriously," she said. "We're ready." At a separate hearing Thursday, a Treasury Department official said U.S. sanctions are disrupting North Korean and Iranian companies' ability to help their countries develop nuclear weapons.

"We target not only the missile or bomb maker, but the procurement fronts, the brokers and middlemen, the logistical apparatus used to move dangerous weapons to market and the financiers," he told a House of Representatives Financial Services subcommittee hearing.