Thousands of Hong Kong Muslims marched Friday to condemn the publication of cartoons of the Prophet Muhammad that have triggered demonstrations around the world. 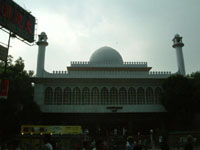 The Muslims, mostly Pakistanis, Indians, Indonesians and Sri Lankans living in the territory, angrily chanted slogans as they marched from a downtown mosque to the local office of the United Nations High Commissioner for Refugees.

"Don't play with our religion," read a placard upheld by a protester.

Ghulam Mustafa, one of the organizers, said 3,000 people participated in the protest. Police had no immediate estimate of crowd size.

The march was organized to protest a Danish newspaper's publication of cartoons of the Prophet Muhammad which have sparked violent international protests. The drawings, including one depicting the prophet with a turban shaped like a bomb, have since been reprinted in other newspapers including in Europe and the United States.

Islam widely holds that representations of Muhammad are banned for fear they could lead to idolatry.

"We'll stress to our community ... that this protest will in no way be violent," he said, reports the AP.