French President Jacques Chirac started an Asian tour Friday with a trip to Thailand , becoming the first French leader to visit since the two countries established diplomatic relations 150 years ago. French flags and giant portraits of Chirac and his wife, Bernadette, festooned major roads in Bangkok to greet the delegation, which includes business leaders and the ministers of foreign affairs, defense, economy, tourism and commerce. 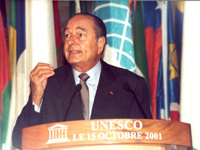 King Bhumibol Adulyadej and Queen Sirikit personally welcomed Chirac at the airport ahead of a state dinner at the royal palace Friday evening. On Saturday, Chirac was to hold talks with Prime Minister Thaksin Shinawatra, pay homage to victims of the 2004 tsunami, and announce a push for increased French investment in Thailand . Bilateral trade jumped 37 percent last year to Ђ 2.8 billion (US$3.3 billion).

Chirac's two-day trip to Thailand , the first by a French leader since the countries established diplomatic ties in 1856, will be followed with a trip to India . The Indian leg of his trip was almost overshadowed by concerns over a decommissioned French aircraft carrier containing tons of toxic materials. The asbestos-carrying Clemenceau had been en route to India to be dismantled when Chirac on Wednesday ordered it back to France , allowing him to focus his trip on boosting economic ties, reports the AP.