A violent rainstorm struck northwestern Cambodia , damaging or sweeping away about 180 houses, including one owned by a former Khmer Rouge leader, officials said Friday. At least four people were injured. The victims suffered broken bones when their homes collapsed during the unseasonal downpour Thursday evening, said Ieng Vuth, deputy governor of Pailin where the storm hit. February is normally a dry month in Cambodia . 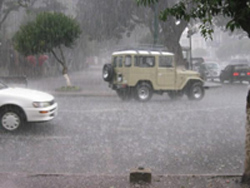 Most of the destroyed houses were made from wood with thatched and zinc roofing, and were swept away by strong winds, said Norng Vanny, a military police officer in Pailin.

"I had never seen anything like this before. Some houses got blown away like cotton," Norng Vanny said. He said the strong gusts blew a police car off a hill. About 180 houses were damaged or lost in the storm, Ieng Vuth said.

The house of Khieu Samphan, a former top leader of the genocidal Khmer Rouge regime, was also damaged, said his neighbor, Khout Nork, contacted by telephone. He said Khieu Samphan and his family were inside the house when the storm ripped a zinc sheet off the roof and knocked over the home's wooden gate. He said they were not injured.

Pailin, once a stronghold of the now defunct Khmer Rouge, has suffered severe deforestation as a result of extensive logging by the communist regime to finance its guerrilla warfare against the central government. Fighting ended in Pailin when a group of Khmer Rouge mutineers joined the government in 1996. Interior Minister Sar Kheng arrived Friday in Pailin, about 285 kilometers (180 miles) northwest of the capital, Phnom Penh , to inspect the damage, Norng Vanny said, reports the AP.