About 3,000 Muslims burned an effigy of U.S. President George W. Bush and called for an international boycott of Danish products Friday to protest the publication of cartoons depicting the Prophet Muhammad, officials said. 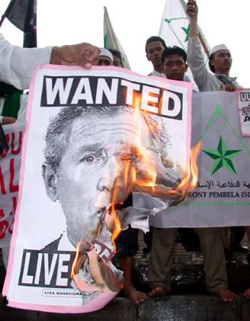 The rally outside the headquarters of the fundamentalist Pan-Malaysian Islamic Party in Malaysia's northeastern Kelantan state was the biggest so far against the drawings in the mostly Muslim Southeast Asian nation. "This is an expression of our anger and condemnation of the cartoons," said Anual Bakri Haron, a spokesman for the Islamic party, which governs Kelantan.

The images, which first appeared in a Danish newspaper in September, before being reprinted by others, mostly in Europe , have sparked international anger among Muslims, who widely regard any depiction of the prophet as blasphemous.

Earlier this month, Malaysia 's federal government ordered a nationwide ban on possessing or distributing the caricatures of the Prophet Muhammad and suspended the publication of two newspapers that recently reproduced the cartoons, reports the AP.