An entire village has been buried by a major landslide in the central Philippines following heavy rains. 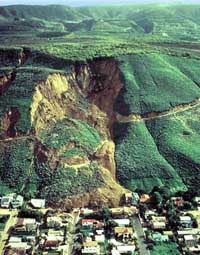 Only four people have been confirmed dead, but Red Cross officials estimated that 200 might be dead, and said a further 1,500 were missing.

The landslide hit Guinsaugon village in the town of St Bernard on the southern part of the island of Leyte. Survivor Dario Libatan said: "It sounded like the mountain exploded, and the whole thing crumbled."

"I could not see any house standing anymore," he said. The landslide followed heavy rains that had fallen for about 10 days over this part of the Philippines.

The BBC's Sarah Toms in Manila says Leyte lies in the path of many typhoons each year, and is lashed time and time again by severe storms.

She says illegal logging has been blamed for leaving some areas denuded of forest and vulnerable to floods and landslides.

Civil defence officials said only four bodies had been recovered from the scene so far, but the death toll was likely to rise as the scene of the disaster had been difficult to reach.

Initial reports said there may have been 500 houses in the village, and that a school was among the buildings buried, reports BBC news.