President Hugo Chavez described Washington's foreign policy as "crazy" Thursday after the U.S. Secretary of State labeled his government as one of the region's biggest dangers just days after making a diplomatic overture to mend frayed ties. 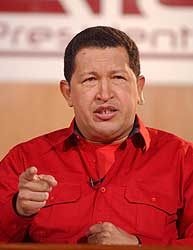 "Are they crazy?," the leftist Chavez told reporters. "Could it be true what the people in the street are saying? That Chavez is driving them crazy?"

Chavez was responding to comments made earlier Thursday in Washington by U.S. Secretary of State Condoleezza Rice to the House Foreign Relations Committee: "The Western Hemisphere is our neighborhood. One of the biggest problems is Venezuela."

"The Chavez government is attempting to influence Venezuela's neighbors away from democratic processes," Rice had said, adding that the country's close ties to Cuba were "particularly dangerous" for regional stability.

"See this aggression?," Chavez said. "They are the ones that attack us, everyday." "They've tried for some years to isolate us, to block us. They've failed and they will fail because they are wrong," he said. "World opinion is with Venezuela."

Thursday's dispute reverses what had appeared to be slight detente in the two countries' strained relations. On Tuesday, U.S. Assistant Secretary of State Thomas Shannon invited Venezuela's ambassador Bernardo Alvarez to a meeting in Washington that was welcomed by both sides as a significant step toward greater communication despite political tensions.

"The government of (U.S. President George) Bush does not have a foreign policy," said Chavez, reports the AP.