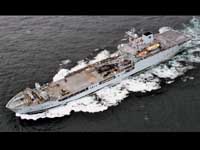 The migrants were traveling to Central America and had apparently hoped to slip into U.S. territory when their boat sprung a leak, said Colin Gracey, Great Britain's consul for Guatemala and neighboring El Salvador.

"They were in danger of drowning because their boat was sinking," Gracey said in a phone interview.

A mercantile ship known as the Greenwich Maersk sailed close to the sinking boat and rescued those onboard, though further details of the rescue were unavailable.

Gracey said at least 77 Ecuadoreans had been rescued, but the total number of people aboard the ship was not clear. The medical conditions of those rescued was also unknown.

Ecuadoreans who leave their impoverished South American nation in hopes of reaching higher-paying jobs in the United States often head to Central America by sea before continuing the trip north over land, reports the AP.