U.N. Secretary-General Kofi Annan has endorsed a call by a panel of U.N. experts on the United States to close the Guantanamo Bay detention camp. But Mr. Annan also expressed reservations about the report. 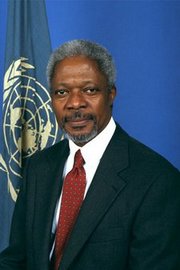 Issued earlier Thursday by five U.N. human rights experts, the report says harsh conditions at the Guantanamo Bay in some cases could constitute torture. In remarks to reporters, Mr. Annan said prisoners have a right to expect certain conditions. "The basic point (is) that one cannot detain individuals in perpetuity and that (there) have to be… charges have to be brought against them, and (they have to) be given a chance to explain themselves and prosecuted, charged or released. I think (this is) something that is common under any legal system, and I think sooner or later there will be a need to close the Guantanamo, and it will be up to the U.S. government to do it as soon as possible," he said.

But Mr. Annan then went on to distance himself from the report, telling reporters it is not an official U.N. document. "These are individual experts who are appointed to make an independent assessment. And it is not a secretary general's report, or the U.N.'s report. We should see it in that light," he said.

The 54-page document released by the Geneva-based U.N. Commission on Human Rights calls on the United States to shut down Guantanamo immediately, and to bring all detainees to trial or release them.

The United States has rejected most of the report's allegations, calling them "largely without merit and not based on facts."

White House spokesman Scott McClellan dismissed the report, saying it appears to be a rehash of allegations made by lawyers for some of the detainees. He noted evidence that detainees associated with al-Qaida are trained in trying to disseminate false allegations. "The United Nations should be making serious investigations across the world, and there are many instances in which they do when it comes to human rights. This was not one of them. And I think it's a discredit to the U.N. when a team like this goes about rushing to report something when they haven't even looked into the facts. All they have done is look at the allegations," he said.

McClellan noted that the International Committee of the Red Cross has full access to the Guantanamo facility, and pointed out that the authors of the report had refused an invitation to visit the camp,reports Voice of America.