Plushenko: If I do my best, I can win first place

Evgeni Plushenko isn't always the ideal student. Sometimes he even makes fun of his coach. But if Plushenko keeps skating the way he did in winning the Olympic men's short program Tuesday, he can laugh at the world all he wants. 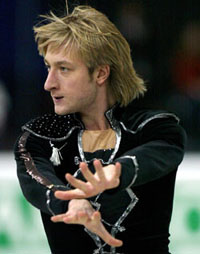 Plushenko: If I do my best, I can win first place

The Russian performed what he called a "perfect" short program in dominating the event, essentially turning the remainder of the men's figure skating contest into a battle for silver and bronze. Several hours after the dazzling performance, the three-time world champion agreed to answer some questions, over the objections of coach Alexei Mishin.

While Mishin insisted his student didn't understand the queries, Plushenko ignored his mentor and answered in precise English that was as spotless as his skating. "The fight starts right now," Plushenko said after his 90.66 points, the highest short program total since the new code of points began in 2003, gave him more than a 10-point lead over three-time U.S. champion Johnny Weir. "Yeah, I have 10 points more than everybody. I am happy with the result, of course.

"But I should perform the same like tonight in the free program. If I do my best, I can win first place." Weir and pretty much everyone else concede that. The 2002 Olympic silver medalist should have no trouble bringing home a fifth straight men's gold medal for a Russian or Soviet skater.

"I've been touted as America 's next medal hope," said Weir, who had a personal best of 80.00. "As long as I go well, I can't see why not. I will definitely race for silver."

Plushenko, 23, pretty much made sure it won't be a race for gold when he nailed every element. A quad toe loop-triple toe loop combination led to a solid triple axel followed by complex footwork that segued into a triple lutz. Only when his final combination spin ended did he lighten up, going from intense concentration to a series of fist pumps. He seemed more relieved than excited.

"I am very happy I achieved a new personal best," said Plushenko, who admitted he was a "little bit sick" earlier this week. "I did it in the Olympic Games. It is very important to me. Everything was clean." Except when Mishin attempted to cut short interviews and Plushenko flashed a sly smile. "Yes, I will answer," he said as Mishin harrumphed, reports the AP.