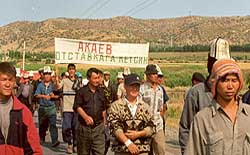 The uprising in Andijan erupted in May when militants seized a prison and freed 23 businessmen on trial for alleged Islamic extremism. The attackers also seized a local administration building and took hostages, as thousands of demonstrators gathered nearby to press economic and social grievances.

Rights groups and witnesses said hundreds were killed in the crackdown. The government blamed Islamic militants for instigating the violence, and said 187 people died. In the past four months, Uzbek courts have convicted 151 people in closed-door trials criticized by human rights groups as a government-orchestrated show with evidence coerced by torture, reports the AP.