Communist rebels ambushed an army patrol, killing three soldiers early Wednesday in west Nepal where the rebels have intensified attacks and thousands of troops have been mobilized to battle the insurgents. 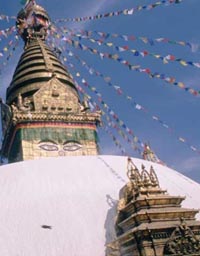 An international right group, meanwhile, warned that 10 years of the Maoist insurgency has pushed this Himalayan nation to the verge of a humanitarian disaster.

The rebels ambushed an army patrol near the village of Bibeke, about 250 kilometers (150 miles) west of Katmandu, early Wednesday, killing at least three soldiers and injuring two others, a Royal Nepalese Army official said.

The ensuing gun battle lasted until dawn, when reinforcements reached the mountainous area and the guerrillas fled, he said. The official, who spoke on condition of anonymity in accordance with army policy, said a number of rebels were also believed to have perished.

New York-based Human Rights Watch said Wednesday 10 years of armed insurgency has subjected the Nepalese to severe abuses by Maoist rebels and government forces and brought the country to the brink of crisis, reports the AP.