Jordan handed down its fourth death sentence in absentia against al Qaeda's leader in Iraq Abu Musab al-Zarqawi on Wednesday, after finding him and eight others guilty of plotting chemical attacks in the kingdom. 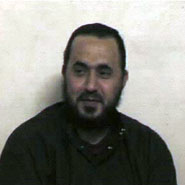 Jordan's state security court said it had evidence that Zarqawi meticulously oversaw plans to use suicide bombers to attack U.S. and government targets. The plan was thwarted in April 2004.

Five of the nine sentenced to death are under arrest. A 10th suspect received a three-year jail term.

The plan included attacking intelligence headquarters and U.S. interests with a series of suicide bombings using trucks laden with chemical explosives in Jordan, a close ally of Washington's.

An audio tape attributed to Zarqawi, posted on a Web site shortly after the arrest of the group, claimed that his group planned an attack on the Jordanian intelligence service but not using chemical weapons as Amman has alleged.

Zarqawi, a Jordanian whose real name is Ahmad Fadil al-Khalayleh, has previously been sentenced to death by the state security court for the murder of a U.S. diplomat in Amman in October 2002, reports Reuters.