Serbia 's prime minister on Wednesday rejected Kosovo's proposed independence, saying it would represent "violence" against a sovereign European state. Premier Vojislav Kostunica was speaking just days before the start of U.N.-mediated talks between Serbian and independence-seeking Kosovo Albanian officials on the future status of the troubled province. 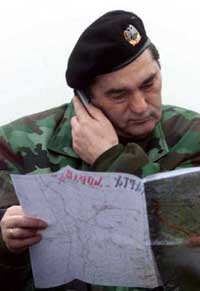 The talks were expected to begin Feb. 20 in Vienna , Austria . "Any attempt to grab our territory would represent legal violence against a democratic country and international order," Kostunica said in his speech to mark 203 years of Serbia 's statehood.

Kostunica said that giving Kosovo full independence was "unthinkable," and that the most the breakaway province could be offered was "substantial autonomy."

Kosovo has been a U.N.-run protectorate since 1999, when NATO bombing forced Serb troops to halt a crackdown on ethnic Albanian separatists there. While it formally remains part of Serbia , Kosovo is mostly populated by ethnic Albanians who have rejected offers of broad autonomy and demand outright independence.

Kostunica did not directly address a claim made last week by an ultranational Serbian party leader, Tomislav Nikolic, that the two had agreed to proclaim Kosovo "occupied territory and defend it by all means" if it gained independence, reports the AP.