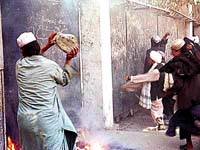 The massive crowd went on a rampage in the northwestern city of Peshawar, torching businesses and fighting police, who struck back with tear gas and batons. It was the third straight day of violent demonstrations in the Islamic nation.

The rioters ransacked the offices of the Norwegian mobile phone company Telenor, three cinemas and offices of Mobilink, the main mobile phone operator in the country, witnesses said. They also burned a bus terminal operated by the South Korean company Daewoo. Flames were shooting out of some of the buses, private TV station Geo reported.

Paramilitary forces were deployed, and the government announced that schools and colleges would be closed in northwestern Pakistan for one week to protect students from violence. Authorities also announced a ban on rallies in eastern Pakistan for an indefinite period.

Demonstrations around Asia and the Middle East over the cartoons, which first appeared in a Danish newspaper in September and have been reprinted by other newspapers, mostly in the West, have subsided in recent days, including in Afghanistan, where 11 people died in riots last week.

But the protests have gathered momentum in Pakistan this week. Islamic groups and traders' associations have organized shutdowns and street rallies that have descended into violence, reports the AP.