A military court condemned nine men, including al-Qaida in Iraq leader Abu Musab al-Zarqawi, to death Wednesday for a plot to carry out a chemical attack on the kingdom. Al-Zarqawi and three others received the death penalty in absentia. It was the third death penalty that Jordanian courts have handed down to al-Zarqawi, who runs the most notorious insurgent group in Iraq . 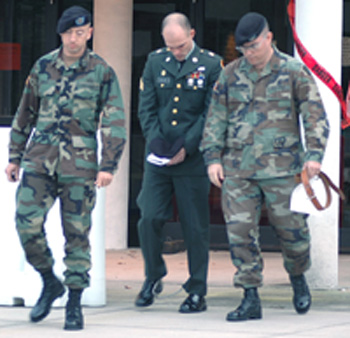 But the plot's alleged mastermind, Azmi al-Jayousi, and four co-defendants were in the dock when the judge condemned them to death for the 2004 plot. The court sentenced two of the 13 defendants to prison terms of between one and three years, and acquitted another two defendants.

The 13 were charged with conspiring to attack various sites in Jordan by setting off a cloud of toxic chemicals that would have killed thousands of people, according to the authorities.

The prosecution told the court that al-Zarqawi sent more than US$118,000 (euro 94,560) to buy two vehicles which the plotters were to use in the attack. Suicide bombers were to drive the vehicles, loaded with explosives and chemicals, into the grounds of the General Intelligence Department in Amman and detonate them.

The indictment said that when investigators conducted an experiment with small amounts of the chemicals found with the defendants, they found it produced "a strong explosion and a poison cloud that spread over an area of 500 square meters (yards)", reports the AP.