Visiting Myanmar Prime Minister Gen. Soe Win met Wednesday with Chinese President Hu Jintao after promising to work more closely with Beijing to crack down on opium trafficking. Soe Win was in Beijing on a trip meant to improve trade ties with China , one of his military-led country's top foreign investors and diplomatic partners. 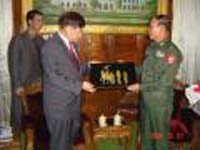 The United States and other Western countries shut Myanmar 's government and have imposed sanctions over its human rights record. China has refrained from joining in the criticism, saying human rights are an internal affair for its Southeast Asian neighbor. But Beijing is eager to stop a thriving cross-border trade in opium, heroin and amphetamines.

Myanmar , also called Burma , is one of the world's top exporters of the drugs. After Soe Win's arrival in China on Tuesday, the two countries signed eight agreements in areas including cooperation on technology, air travel and the construction of a power plant.

Hu welcomed Soe Win in the Great Hall of the People, the seat of China 's legislature in Beijing . "Your visit will surely push forward friendly bilateral relations," Hu told the visiting leader. "I am sure your visit will be a complete success. Now I hope to listen to your opinion." He did not elaborate. Soe Win was due to visit several Chinese cities before leaving on Saturday, reports the AP.