South Korea 's top envoy to Japan indicated Wednesday that normalizing relations between the two countries would be impossible as long as Japanese Prime Minister Junichiro Koizumi and other officials visit a war shrine that honors convicted war criminals. 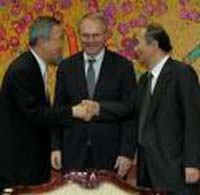 "As the ideology and principle of the Yasukuni (shrine) idealizes and justifies Japan 's past militaristic aggression, we can't pursue normal bilateral ties by tolerating it," Ra Jong-yil said on the sidelines of a general meeting of South Korea 's top overseas diplomats, according to the Foreign Ministry. However, Ra said talks between foreign ministers and their underlings from both countries should be maintained.

South Korea, under Japanese rule from 1910 to 1945, views the annual visits as a sign that Japan hasn't truly repented for its wartime past, despite numerous apologies by its leaders. In January, Koizumi said a country's leader has the right to express respect to the nation's war dead, and that his visits to the shrine merely show his determination that Japan should never wage war again, reports the AP.