Bulgaria 's prime minister will hold talks Wednesday with leaders in Romania to discuss the two countries' efforts to join the European Union. During the meetings, Bulgarian Prime Minister Sergei Stanishev and his Romanian counterpart, Calin Popescu Tariceanu, will discuss progress in preparations for EU membership. Both countries hope to join in 2007 but need to crack down on corruption and implement other reforms. 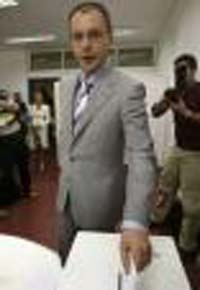 The EU is drafting a last progress report on Bulgaria and Romania before finalizing the recommendation for EU governments in May, when both countries will know whether they will join on Jan. 1, 2007 .

The EU has been critical of Romania 's reform efforts to get its legislation and laws in line with EU norms. It has warned both countries that their entry into the 25-nation bloc can be delayed for up to one year if they do not implement the reforms. The two prime ministers will also discuss joint trade projects, economic reforms and border security, reports the AP.