Prices for Sumatran tiger bones used in traditional Asian medicines have more than tripled in the past two years because of declining numbers of the endangered animals, an environmental group said Wednesday. 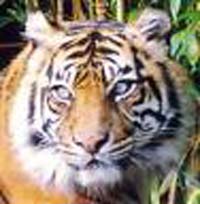 Sumatran tigers, which now number less than 700, are under increasing threat from habitat destruction and trafficking syndicates that sell their bones for traditional medicines, mostly in China and other Asian countries. "It's straight economics," said Debbie Martyr, who prepared the report and works in the Kerinci-Seblat National Park in Indonesia 's Sumatra island.

"Tigers are being wiped out in India . They've been almost wiped out in Thailand and parts of Indochina . The last substantial population of tigers may very well be in Sumatra ." She said tougher law enforcement measures that led to the seizure of 24 tiger skeletons last year in Taiwan has contributed to the spike in prices.

However, habitat loss from the construction of roads through the Kerinci-Seblat park, as well as the destruction of forests on the edge of the 10,0000-square mile (259,000-square kilometer) park, is "the biggest threat" to the endangered animals, she said.

"You once had very large areas of forest adjacent to the park which made access to the park difficult," Martyr said. "Those forests are now being cleared for palm oil plantations. What happens is that you have people coming in contact with wildlife and it becomes a great deal easier to hunt, conduct illegal logging and other things that damage the park," she said.

However, she said law enforcement in and around the Kerinci-Seblat park appeared to be improving. Park rangers made 42 arrests for a range of wildlife crimes in 2005 and 10 of those suspects were prosecuted, she said. Seven of the arrests were tiger-related, up from two the year before, she said.

On Monday, the World Wide Fund for Nature said demand from newly wealthy Tibetans for tiger skins and other rare animal parts has also contributed to the threat. Evidence gained from seizures and trade investigations point to Tibet and China as the major markets for the skins, the WWF said. In Tibet , wealthy people are using tiger skins to adorn traditional robes, it said.

The WWF estimates the number of wild tigers in the world has fallen by 95 percent over the last century to between 5,000 and 7,000 today because of poaching, habitat destruction, loss of prey and conflicts with humans, reports the AP.