Juggling motherhood and speedskating, Svetlana Zhurova won gold in the women's 500-meter sprint yesterday in Turin with a 2-year-old son cheering her on back home near St. Petersburg. 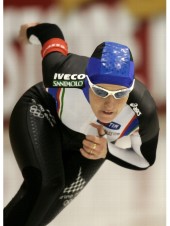 ''Now, I have a big fan of me that I can do it for," Zhurova said, breaking out in a huge smile.

Something sure clicked after she gave birth to Yaroslav -- ''Yary" for short -- 26 months ago. While many top athletes-turned-mothers never overcome the effects of pregnancy, Zhurova actually improved on the solid, but hardly spectacular results from her younger days.

She resumed training just over a year ago, lost some 40 pounds and came through last month with the biggest win of her career, capturing the world sprint championship at age 34. She topped that in Turin with the first medal -- of any color -- in her fourth trip to the Olympics.

Zhurova had a combined time of 1 minute 16.57 seconds over two 500s skated a couple of hours apart, beating out a pair of Chinese skaters who failed to give that country its first Olympic gold in long-track speedskating.

Wang Manli, the dominant female sprinter since the Salt Lake City Games, settled for the silver, 21-hundredths of a second behind the winner. Rising star Ren Hui took bronze in 1:16.87.

The four Americans were never a factor in an event once dominated by Bonnie Blair. Jennifer Rodriguez had the best showing, 11th, more than a second behind Zhurova, reports the AP.