Envoys of the Dalai Lama have arrived in China for talks, the exiled Tibetan spiritual leader's office said Wednesday. Lodi Gyaltsen Gyari, the special envoy of the Dalai Lama who led earlier rounds of talks, was accompanied by another official and two aides, according to a statement released by the Dalai Lama's office. 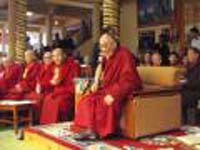 The statement gave no details about the talks, which are believed to center around allowing more autonomy for Tibet to protect its unique Buddhist culture. The Dalai Lama has said repeatedly that he doesn't want independence for Tibet , only more autonomy.

"For the last four meetings, the envoys have had a very candid and serious discussion with their counterparts in the Chinese leadership," Tenzin Geyche Tethong, Secretary to the Dalai Lama, said in the statement. China has held four rounds of talks with the Dalai Lama's envoys since 2002, according to officials of the government in exile.

The Dalai Lama fled Tibet in 1959 following an aborted uprising against Chinese rule in the territory and now keeps an office in exile in the Himalayan town of Dharmsala, reports the AP.