Heavy snow slid off the roof of a school building, killing a student in northern Japan on Wednesday, police said. 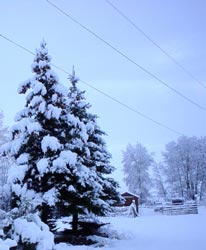 The accident occurred in the city of Ebetsu on the northern island of Hokkaido, said a police official who identified himself only by his family name, Yoshida. The 23-year-old veterinary student went missing after midnight and his body was pulled from the snow early Wednesday morning.

Yoshida said police were unaware of other people who might be trapped under the snow, but Kyodo News reported that three other students were missing.

A team of rescuers carefully searched around the building as they shoveled the large pile of snow but found no one else trapped, local fire officials said, adding that the officials determined that the three students reported missing were unrelated to the accident.

The accident comes as Japan struggles through one of its snowiest winters on record.

On Friday, an avalanche buried an outdoor hot spring at a popular traditional inn in the northern prefecture of Akita, killing one person and injuring 16.

The cold spell has caused more than 100 snow-related deaths since early December, the highest since the winter of 1983-1984, when the weather claimed 131 lives in northern Japan, according to the Meteorological Agency, reports the AP.