Two protesters were killed and thousands in the Pakistani city of Lahore attacked fast-food outlets and the provincial assembly building in continuing protests over editorial cartoons showing the Muslim prophet, Muhammad. Violent protests also spread to other major cities across Pakistan. 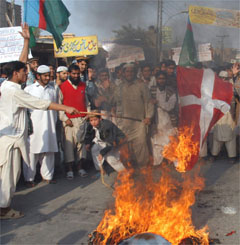 More than 10,000 people flooded the streets of Lahore, directing their anger over the cartoons at government and Western targets. Although the cartoons were first published in Denmark, the mobs attacked U.S.-based fast-food restaurants and a hotel, a British bank, a Norwegian office, and the provincial Pakistani assembly building.

Witnesses also reported that a Holiday Inn and more than 200 cars were damaged. Hundreds of people ransacked a Norwegian mobile phone company before police used tear gas to disperse them.

Interior Minister Aftab Khan Sherpao, speaking on state television, says two protesters in Lahore died when a security guard fired on demonstrators trying to force their way into the bank.

Demonstrators also turned out in the capital, Islamabad, where lawmakers staged a silent march down the city's main thoroughfare.

Amin Faheen heads the opposition Pakistan People's Party. Surrounded by fellow protesters, he said Western countries need to respond to the enormous outrage the Danish cartoons have provoked across the Muslim world.

"We do not support violence, but if our feelings are not consoled, then I think people have all the right to do whatever they want to do," said Amin Faheen. "Then we will not lead them, they will lead us,” reports Aljazeera.