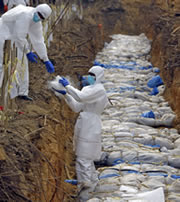 The victims, some of whose bodies were mutilated, were likely killed between 2002 and 2004 by paramilitary fighters belonging to the United Self-Defense Forces of Colombia, or AUC, the attorney general's office said.

Officials said they could not rule out the possibility of finding more mass graves in the area.

The area where the bodies were uncovered is a stronghold of the AUC's Northern Bloc, which has been implicated in several human rights abuses over the years. Members of the faction were believed to be among the dead, reports the AP.