Olmert rules out talks with Hamas

Acting Prime Minister Ehud Olmert on Tuesday ruled out any peace talks with the Palestinians once the Hamas militant group takes power. 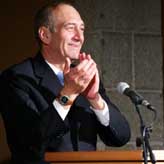 Olmert rules out talks with Hamas

Olmert praised Palestinian leader Mahmoud Abbas, who favors a resumption of peace talks, but said no negotiations can take place once Hamas forms a new government.

Hamas trounced Abbas' Fatah Party in legislative elections last month and is poised to form a new government in the coming weeks. Abbas, elected separately last year, will remain in office and has been taking steps in recent days to curb the power of the incoming Hamas legislature.

Olmert said "all contacts" with the Palestinians will be reviewed once Hamas joins the government.

"We will not negotiate and we will not deal with a Palestinian Authority that will be dominated wholly or partly by a terrorist organization," he said in comments to visiting Jewish American leaders.

Israel has said it will not deal with Hamas until it renounces violence, recognizes Israel and accepts existing agreements between Israel and the Palestinians.

"The Palestinian government, under the leadership of Mahmoud Abbas, whom we respect and support ... will not have to make a serious choice," Olmert said.

"Do they want to become part of a terrorist organization, or do they want, even at this late stage, to take serious actions," he said, reports AP.