Myanmar's Prime Minister Gen. Soe Win arrived in Beijing on Tuesday in a trip aimed at boosting economic and trade ties along with anti-drug cooperation. Soe Win met with Chinese Premier Wen Jiabao at the Great Hall of the People, the seat of China's legislature. State television showed the two leaders shaking hands before sitting down to discussions. 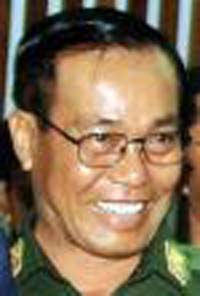 "My goal is to strengthen the relationship in all areas including deepening the friendly relations that we have developed over the years," Soe Win told Wen.

Soe Win was scheduled to meet with President Hu Jintao and Wu Bangguo, China's No. 2 Communist Party leader, on Wednesday. After Beijing, Soe Win was to visit the northwestern province of Shaanxi and the southern province of Guangdong.

Earlier Tuesday, Soe Win was quoted by the official Xinhua News Agency as saying that Myanmar will step up its anti-drug cooperation with China and work with its larger neighbor to cultivate alternative crops to replace the lucrative opium poppy.

He made the remarks in a meeting with provincial government officials in Kunming, the capital of neighboring China's southern Yunnan province, Xinhua said. Yunnan abuts the opium-producing "Golden Triangle," where Myanmar, Laos and Thailand converge.

The United Nations has praised Myanmar for reducing the land cultivated for opium by 80 percent over the past nine years. But Myanmar is still a major source of amphetamines and the world's largest producer of illicit opium after Afghanistan. Much of the drug activity takes place in regions bordering China.

Myanmar's regime has also been accused of committing human rights abuses and spreading instability in the region. It was sanctioned by the United States in 2003. Beijing, however, has resisted criticizing Myanmar, saying such matters are the country's "domestic affairs."

"China adopts the principle of noninterference of other countries' internal affairs," Chinese Foreign Ministry spokesman Liu Jianchao said at a regular press briefing Tuesday. "We believe that the issues of Myanmar should be solved through negotiations between the government and its people."

Myanmar's military seized power in 1988 after violently suppressing pro-democracy protests. It held a general election in 1990, but refused to recognize a landslide victory by democracy activist Aung San Suu Kyi's party. Suu Kyi, a Nobel Peace Prize winner who has spent 10 of the last 16 years in detention, is among about 1,100 political prisoners believed to be held in Myanmar, also called Burma, reports the AP.