Rice to hold testimony about Iran, Hamas and Iraq

Concerns about U.S. policy toward Iraq, Iran and the Hamas organization running the Palestinian government seem sure to dominate U.S. Secretary of State Condolezza Rice's testimony to a Senate committee. Rice's appearance Tuesday before the Senate Foreign Relations Committee officially was to discuss President George W. Bush's proposal to give the State Department US$33 billion ( Ђ 27.76 billion) for the budget year that starts Oct. 1. 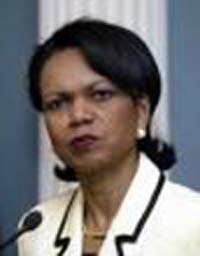 Rice to hold testimony about Iran, Hamas and Iraq

But that issue was expected to take a back seat to senators' worries about international issues that have moved to the forefront since Rice last appeared before Congress, in October. Last month, the Islamic group Hamas, deemed a terrorist group by the Bush administration, won a decisive majority in Palestinian legislative elections, raising questions about prospects for peace with Israel. Hamas has carried out terrorist attacks against Israel and does not recognize that country's right to exist.

Many lawmakers have indicated they would oppose U.S. aid to a Hamas-led Palestinian government unless the group renounces violence. In Iran, the government has defied international demands to halt what it calls nuclear research. That led the International Atomic Energy Agency, the United Nations' nuclear watchdog, to report Iran to the Security Council for possible admonishment or sanctions.

Republicans and Democrats have urged the administration to not rule out any option, including military action, for dealing with Iran. On Sunday in Iraq, the fledgling democracy's leading Shiite bloc chose Prime Minister Ibrahim al-Jaafari for another term, a major step toward forming a permanent government.

Although lawmakers acknowledge progress politically in Iraq, some express frustration over what they say is the administration's lack of adequate action on repairing Iraq's oil production infrastructure and fully restoring its water and electrical power.

Rice is expected to touch on challenges the administration faces in all three areas. She also is expected to discuss plans to reorganize the department to emphasize humanitarian efforts and improve management of US$18 billion ( Ђ 15.14 billion) in foreign aid programs.

Bush's US$33 billion ( Ђ 27.76 billion) budget request for the department would boost funding by 13.1 percent over this year, the largest proposed spending increase for any federal agency or branch of government. Rice wants US$3 billion ( Ђ 2.52 billion) for the Millennium Challenge Corporation, a hallmark Bush administration program designed to reward developing nations for good governance and a commitment to democracy.

The administration asked for the same amount a year ago, but a skeptical Congress trimmed the request to US$1.7 billion ( Ђ 1.43 billion). A fight over full funding for the program is brewing again on Capitol Hill, reports the AP.