Cambodian Prime Minister Hun Sen on Tuesday endorsed an opposition party proposal to allow a government to be formed with a simple majority in parliament rather than the two-thirds now required. Hun Sen said unless the change is made Cambodia will continue to be dogged by the habit of contesting parties holding each other "hostage" for political advantage if none fails to win a two-thirds majority in the 123-seat National Assembly. 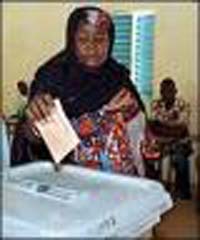 After the last election, in which Hun Sen's Cambodian People's Party won a majority 73 seats, the country was left without a properly functioning government for almost a year as the parties haggled over forming a coalition.

A similar, but less protracted, situation ensued after the 1998 polls. Hun Sen said a constitutional change would prevent future deadlocks, and gave his party's support to the proposal put forth Monday by Sam Rainsy, head of the Sam Rainsy Party.

Sam Rainsy, in a letter to Hun Sen and National Assembly president Prince Norodom Ranariddh, suggested that the vote needed to govern be changed from a two-thirds majority in the lower house to a "50+1", 50 percent plus one vote, formula. "The political deadlock after the last two elections has given us enough of a lesson," Hun Sen said in a speech at a teacher graduation Tuesday that was broadcast on national radio, reports the AP.