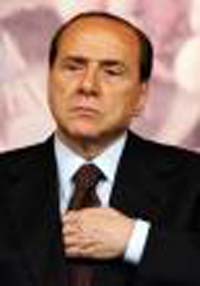 Italy's electoral campaign for the April 9 vote kicked off Friday. The centerpiece of Berlusconi's bid for a second term in office is a pledge to cut Italy's tax burden from 41.4 percent to 38 percent. The center-right also is promising to create 1.5 million new jobs, slash unemployment from about 7 percent to 4.5 percent, and increase old-age pensions to a minimum of Ђ 800 (US$950) per month.

He said he would discuss the program with his coalition allies in coming days. The premier's announcement follows weeks of aggressive unofficial campaigning that included a barrage of TV and radio appearances ahead of the campaign's official opening, which limited such appearances because of rules that give competing coalitions equal air time.

In recent days, Berlusconi has attracted headlines, scorn from his opponents and even criticism from some allies for comparing himself to Napoleon and to Jesus Christ, reports the AP.